The Tragedy of Marie Adelaide

Of all the rulers of western European countries in the first quarter of the twentieth century, few are as unknown to British and American historians as Marie Adelaide, Grand Duchess of Luxembourg during World War I. The small size of her realm alone does not explain history’s neglect; by all accounts Marie Adelaide was an extraordinary personality whose short and tragic life was spent amid revolutionary turmoil and the chaos of the Great War. She has been called both a failure and a saint, and there is evidence for both views.

What follows is a brief summary of the career of the Grand Duchess which I hope to develop more fully as documentary sources become available.1Although short accounts of her reign are given in various general histories of Luxembourg, especially those in French, German, and Luxembourgeois, the only full length biography in any language appears to be Edith O’Shaughnessy’sMarie Adelaide – Grand Duchess of Luxemburg, Duchess of Nassau, published in 1932 and long out of print. Unfortunately this work contains almost no precise documentary references. The author, now deceased, often relied on apparently undocumented, sometimes anonymous eyewitness accounts of key events in the life of her heroine, and perhaps was herself a confidante of the grand duchess. To the enigma of Marie Adelaideis thus added the mysteryof Edith O’Shaughnessy and her sources – a necessary further research project for the modern biographer? 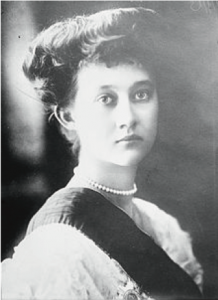 Marie Adelaide was born on June 14, 1894 and died on January 24, 1924, ruling Luxembourg from 1912 (when she came of age at eighteen) until her forced abdication in 1919. After her resignation she roamed Europe in a vain search for spiritual peace, unsuccessfully attempting convent life first with the Carmelites and then with the Little Sisters of the Poor before dying in exile, apparently of an illness contracted while working with the poor in Rome. On these few facts all sources agree, but not on much else.

No sooner had she come to the throne in a wave of popularity, the first sovereign in two centuries to be born on Luxembourg soil and a very beautiful and devout young woman, than her devotion to the Church and to her duties as a Catholic ruler landed her in bitter controversy. In a speech on her coronation day she had stated, “. . . I will be faithful to the noble motto of our ancient house: I will stand fast! [Je maintiendrai)”3

In the mind of the Grand Duchess, “standing fast” meant promoting the common good of her subjects, including the defense of their Catholic faith, to the full extent of the powers accorded to the sovereign by the constitution of Luxembourg. She is said to have remarked of the Catholic Faith of her subjects, “I will not allow their most precious heritage to be stolen while I have the key.”4 It soon became clear to all, both from the words and actions of the Grand Duchess, that she took to heart the motto of St. Joan of Arc, “Dieu premier servi.”

Like the Austrian empress Maria Theresa, Marie Adelaide had not been trained by her father in statecraft – a fact to which she alluded in her accession speech. She was therefore forced to rely to a large extent on the advice of experienced government ministers, especially Minister of State Paul Eyschen who had been a major political influence during the reign of Marie Adelaide’s father, and wielded even more power during the Grand Duke’s fatal illness and the regency of his wife from 1907 to 1912. Eyschen was to face unaccustomed opposition to his will from the new young sovereign.

The first skirmishes between the two occurred over the appointmentsof political radicals to governmentposts. Communism, socialism and anti-clericalismwere gaining momentum in Luxembourg, their proponents using democratic rhetoric to create opposition to the Catholic monarchy. By contrast, Marie Adelaide was exceptionally devout, a daily communicant devoted to Carmelitespirituality who was determined to maintain the Faith among her people. To this end she revived pilgrimages and processions of the Blessed Sacrament that had been allowed to lapse during the reign of her Protestant father, and took part in them to the delight of her people. “Their faith must not be less, but greater when I die,” she was said to have argued, and “You know the history of my people. Their prayers have often been their sole bread. Shall I offer them the stone of unbelief?”5

Her most serious breach with Eyschen came over the proposal to reduce religious instruction in the schools which the Grand Duchess, in opposition to the wishes of her prime minister, refused to sign.6The impasse caused Eyschen to prepare and sign his resignation just before the heart attack which caused his death in 1915. The instability of succeeding ministries and the growth of leftist political power led Marie Adelaide to dissolve the Chambre and call new elections, which resulted in serious losses to the left-wing parties, while it made them more determined to defeat her.7

Although the sovereign was careful to keep within the limits set by the constitution, her enemies (and the enemies of the Church) exploited her political difficulties to stir up sentiment against her. In addition to being charged with bowing to clerical influence, she was accused of intransigence and authoritarianism.8More extravagant charges were soon to come.

The existence of Luxembourg as a nation-state has often been precarious, surrounded as it is by its sometimes covetous neighbors, Belgium, France and Germany. In its present form, Luxembourg is a spinoff of the Congress of Vienna settlements, especially the Treaty of London in 1839. Another Treaty of London in 1867 provided for the neutrality of the new state.9Hence the outbreak of World War I found the country in a dangerous position, unable to defend itself from German invasion because of its neutral status. When, on August 2, 1914 Germany violated the neutrality of Luxembourg on the pretext of protecting the railroads, Marie Adelaide and her government issued formal protests which failed to prevent the military occupation of the country.10

Under the guidance of their ruler and her government, Luxembourg and its people, now behind German lines, wisely did not attempt a foolhardy and vain resistance to the occupying army, but maintained their neutrality throughout the war. (This was to be held against them by the victorious Allies.) Marie Adelaide devoted herself to the work of the Red Cross in Luxembourg and nursed soldiers on both fronts. Political tensions, however, continued unabated throughout the war. The increasingly hostile leftists within Luxembourg seized on every excuse to discredit their royal opponent. Marie Adelaide was of German blood; she had agreed to her sister’s betrothal to a German prince; she went to the funeral of an elderly relative in Germany; she had received the Kaiser in her palace (she had, in fact, only learned of his proposed visit when he was already on his way), and apparently agreed, on the advice of her prime minister and against her better judgment, to receive the German commander when he entered the country.11

Belgium, meanwhile, had been pursuing a campaign ofdiplomacy and propaganda in its bid for Belgian annexation of the Duchy once the war was over.12 Even some of Marie Adelaide’s domestic political enemies supported the Belgian claim, in their hatred for their sovereign. The ambiguous attitude of the Allies after the armistice made the position of the Grand Duchess more and more untenable. Democratic ideology was far more favorable to the establishment of republics everywhere rather than the upholding of monarchy. Furthermore, the perception of the Grand Duchess as “pro-German” made her unpopular to the point that the French government declared in December 1918 to a representative of Marie Adelaide’s government that “The French Government does not consider it possible to have contact or negotiations with the Government of the Grand Duchess of Luxembourg, whom it considers as [having been] gravely compromised with the enemies of France.”13

The political strife of the next few weeks involved all parties. Luxembourgeois supporters of the royal dynasty realized that the cause of Marie Adelaide was lost and favored her abdication and the accession of her sister Charlotte, though the leftists continued to demand a republic. Belgium seemed to regard a republic as potentially more favorable to its goal of annexation, while France began to see the existence of the monarchy as a bulwark against Belgian claims.14In the end, Marie Adelaide bowed to the intense pressure, abdicating in favor of her sister. Charlotte and her successors, however, were not to wield the political power and authority previously accorded to the sovereign by the constitution. With theamendment of article 32 of the Luxembourgeois constitution, sovereignty no longer resides in the person of the sovereign but in the nation. The ruler “has no other powers than those formally attributed to him by the Constitution and specific laws.. ..”15As Denis Scuto puts it, “The formula `by the grace of God’ is emptied of its true meaning,” and the dynasty receives its right to the throne from the people.” “. . . beyond the person of Marie Adelaide, a whole conception of monarchy, overtaken by national and international events, agreed to abdicate. With Marie Adelaide, Grand Duchesse from 1912 to 1919, the figure of the monarch fully exercising constitutional prerogatives and intervening in political debates disappeared.”16The struggle of a young ruler in a tiny country can thus be seen as a microcosm of the epic political and spiritual conflict that has afflicted all of the nations of Europe in turn, since the Protestant Reformation.

It is beyond the scope of this paper to follow Marie Adelaide on the spiritual odyssey which filled the rest of her short life. She suffered keenly under the cross of exile, ill health, and a sense of failure in the religious life where she had hoped to find peace – a peace which only came at last with her holy death, while still in exile. In a sense she was destroyed by the modern ideology which deifies man and democracy and hates the Catholic Church. The tragedy of Marie Adelaide was that she attempted to be, like Charles of Austria, a Catholic monarch in the twentieth century.

Notes
1Many important documents concerning the life of Marie Adelaide remain in the personal files of the royal family of Luxembourg; the archivist assigned to catalogue them has not yet got into the twentiethcentury papers [interview with M. Guy May, Luxembourg National Archives, May 19, 1992].

2I would be very interested in hearing from anyone who may have information about Edith O’Shaughnessy or her descendants.

14See the discussion of these positions in Trausch, “L’accession.”