It is quite likely that the words of today’s Gospel were written by an aged and holy Bishop. For many years – ever since he had been newly-ordained – the words had burned into his heart and into his memory. In truth, they had been sealed permanently upon his soul.

His memory of all these words – and many others as well – had remained clear and accurate. No doubt, in addition to his native talent for retention, his memory “of these special things” had been preserved intact by the Spirit Whom the Master had promised on that special evening.

Any time he recalled that special evening, he could describe certain details as if they had happened only yesterday.

On the Evening of that Last Supper – as he and the other Eleven were to call it – he had pressed his head upon the bosom of the Master. What he had heard that evening was recorded unforgettably in his very being: undeniably the rhythm was divinely inspired; unquestionably the heartbeat was sincerely servile. Even now, as his sight was failing, the enduring memory of that heartbeat was clearly preserved in his bone and marrow. No other Heart, he believed, ever throbbed with the Infinite Love of that hidden Heart!

With unerring accuracy the aged priest of the Master’s First Chosen band of Apostles recalled the example of the washing of feet of the Twelve. 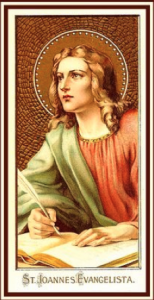 With a slight smile on his face John recalled Peter’s little scene of impetuous protest; the smile widened on his face as he pictured Peter’s subsequent appeal for an abundant ablution. As the Teacher went from one Apostle to the next, John wasn’t quite sure, but he thought he had heard the Master chant softly a poem-song from Isaiah:

“How beautiful on the mountains are the feet of those who bring good news.”

John remembered with special care the voice of the Lord on that evening. The Lord had spoken to them in tender tone – as if to heal beforehand wounds not yet inflicted. He mentioned the “Father” with inflection more reverent than ever. And when, during the course of the evening He called each by name, He raised them from servants to Friends – not like a Shepherd calling his sheep, but as a Shepherd assigning others to shepherd with Him!

John recalled the farewells of the Lord and Master that evening.

No! It was rather the way the Lord had said farewell – and then the path by which He yearned to remain – that John remembered with ritualistic exactness: removing from sight a temple death could not destroy; offering in faith a Body to be consumed, and Blood to be out-poured!

The farewell gift was Someone else again!

Ever since that greeting of peace on resurrection night, John had savored with abundant joy the fruit of the promise, the presence of the Holy Spirit. The Master had described the Spirit as another Advocate, a Paraclete who would always be with those who would qualify as friends of the Master.

That evening of the Lord’s Supper was certainly memorable: the tone of voice the Master used; the words he chose so carefully; the Love which embraced them all in unimaginable affection … from followers of the Lord, to Disciples of the Master, and then befriended by the Spirit.

What more could there be to raise a man from dust … to child … to friend … to Priest!

John would reveal to us what more there is!

In the 19th chapter of his Gospel John records that the place of the skull was the hill of death for criminals. The crosses which stood erect there displayed the twisted, bloody torsos of those condemned to death. It was an arena of shame: foul with stench, full of curses.

In the midday heat on top of Calvary – not far from Bethlehem where Christ was born – was lifted up the Innocent One between two thieves. Not far from the fields where the sacrificial lambs for the temple were pastured, the Spotless Lamb of God abandons Himself totally to the will of the Father. The Eternal High Priest is offering the perfect sacrifice; the perfect victim is immolated in behalf of all the lost sheep.

It is the first and only time in all of history that Supreme Priest and ultimate Victim are the same … and the only sacrifice in all of history ever pleasing to the Father … Who says again, and uninterruptedly, “This is My Beloved Son, in whom I am well pleased.”

At last the gates of heaven are flung open; no further Sacrifice will ever be necessary; no other Priest is to be awaited!

As John gazed upon the Crucified Savior he could number all his wounds, he could count all his bones. He read the sign over the Head crowned with thorns. Pilate had inscribed the offense with words not subject to revision. But as John stared on, he envisioned something different! In the 19th chapter of his Apocalypse, the words “Jesus of Nazareth, King of the Jews” – chiseled crudely in wood – would be translated by Handelian choruses singing endlessly into “King of Kings, Lord of Lords, and He shall reign forever and ever.”

John opens his eyes and is brought back to Golgotha.

From the wooden gibbet of the cross, Jesus, son of the carpenter, cries aloud in prayer and praise: “My God, My God, why have You forsaken me?”

Beneath the cross, in the midst of this apparently God-forsaken spot, there stands fast, in Nazareth’s irreversible fiat, the Virgin-Mother of the Crucified.

John gives eyewitness testimony of what happens next:

His eyes behold the Woman in her quiet sorrow beneath the Cross. This was the Woman who, at Cana – by her gentle persuasion: “Do whatever He tells you” – began the countdown in this final hour of Redemption.

When his eyes look up to Jesus on the Cross, he sees that the Master is watching him.

In a moment of absolute openness and unconditional acceptance John is lavished with another gift: “There is your Mother.” In turn, the Only-begotten Son of Mary says to her: “There is your son.”

Ever since John had first seen Mary, he revered her; now he would be truly devoted to her.

As if stung by some celestial laser – like a lance from the cradle of the Cross, the heart of the Beloved Disciple beats with the pulse of a Priest-Brother of the Lord and of a Devoted Son of this heavenly Mother.

In that moment of mystical adoption John is lifted up into the Hour of the Lord till the end of time.

John – as is every ordained Priest of Christ – is forged into another Christ. John enters into the priesthood of the Eternal High Priest by the threefold Passion of the Life-giving Spirit, His Immaculate Spouse, and the Will of the Father.

On the day of Ordination the man chosen is called forever to be a Priest in the line of Melchisedech. He can set his feet firmly upon the predella of the sanctuary. In every day that follows, the man who would be Priest, must allow himself to be fashioned into that Other Christ which he alone can be!

He must lean close to hear the Sacred Heart of Jesus. He must stand close to Mary at the foot of the Cross to receive the Mother of God as his Mother.

With the gift of the Spirit animating him, he must allow himself to be stretched out to the limits of unlimited Love; he must shepherd the flock of Christ with full Faith by following the signs of the Kingdom above; he must keep alive that Hope which can be relinquished only in the Eternal Kingdom of the Eternal High Priest.

But all this depends upon one frail human factor: a disciple’s will to serve!

The priest of Jesus Christ must in time ascend onto the wood of the Cross and offer himself a willing victim in complete union with the Lamb of God.

Such is the priest’s lofty and divinely appointed function from which he is not permitted to excuse himself.

Kindly pray for all priests – from the eldest to the most recent.