Doctrinal Foundation of Devotion to the Sacred Heart

I would not hesitate to say that devotion to the Sacred Heart is a synthesis of Catholic doctrine. One thing I have learned from our ecumenical age is that we should be very kind, understanding and gracious towards those that are baptized but are not Catholic. However, we should also understand that as Catholics we are distinctively Christian. Indeed the Catholic Church is normative for the whole Christian world.

I can say this with a certain amount of security. My father died when I was about a year old. My mother took in boarders to keep the two of us going. Our first two boarders were two Protestants that stayed with us for years. When I was four years old I complained to my mother; I thought they were my sisters. “How come,” I asked her, “my sisters do not abstain from meat on Friday like we do?” So she took Judith and Susan aside and said, “My boy is asking questions. Would you ask your minister if you can abstain from meat on Fridays, or I will have to ask you to leave.” They abstained from meat on Fridays. Over the years I have taught in six Protestant divinity schools, and published three books on Protestantism that have been used in Protestant seminaries. I understand and, I think I can say, I love Protestants. Although I also know that a Catholic is not a Protestant!

It is this stress that I would like to bring out in our conversation. I believe that the devotion to the Sacred Heart (on its doctrinal side) most clearly distinguishes Catholicism from all other forms of Christianity; certainly from the four thousand nominally Protestant denominations throughout the world.

For the next fifteen hundred years some of the Church’s greatest saints and mystics were specially devoted to the Sacred Heart.

Origins of the Modern Devotion

As Timothy O’Donnell shows in the Heart of the Redeemer, the devotion to the Heart of Jesus goes back to the Gospels and remained unchallenged until the rise of Protestantism. I usually refer to it as the “Protestant Revolution” in contrast with the “Catholic Reformation.” That is why St. Ignatius founded the Society of Jesus, to provide the Church with a Catholic reformation.

In the sixteenth century, the most drastic division in Christian history occurred. Five nations that were Catholic were lost to the Church and large parts of three other countries. Division in Catholic unity came once the doctrinal foundations of what we casually call devotion to the Sacred Heart were undermined. Since then, not only has there been a massively divided Christianity but also a globally disunited humanity.

What was the source of this division in Catholic unity and consequent division in humanity? It was the rise of a chain of errors about God, man, morality, spirituality and human destiny. But there is one basic link in this chain of errors. It is the false belief that we do not have a free will with which we can lovingly respond to God’s mysterious and unfailing love for us.

What I am saying is worth repeating. The most fundamental error that divided the Catholic Church in the sixteenth century and has since been the most divisive element in the Western world is the denial that we have true internal human freedom by which we can either freely serve God or willingly refuse to serve Him.

This error penetrated the Catholic Church through the heresy known as Jansenism. It was named after the French Bishop Cornelius Jansenius (1585-1638). At one time fifty dioceses in France were administered by Jansenist bishops. It is important to bring out the “seed bed” of the errors which have divided the Catholic Church and Christianity for five hundred years; and which have occasioned the rise of the modern devotion to the Sacred Heart.

Among the champions of Catholic orthodoxy who fought against Jansenism was St. Francis de Sales. At times he even risked his own life. He was a bishop like Jansenius and explained, “A bishop created the error; my duty as a bishop is to correct this error by teaching the truth.” The two masterpieces of the writings of St. Francis de Sales are Introduction to the Devout Life and his classic work On the Love of God. Both of these works are indispensable for a correct understanding of the meaning of true love. 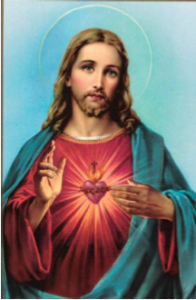 In my forty-two years in the priesthood I have dealt with many souls and have been involved in many problems. I believe the hardest mystery we are called on to believe, when everything is against it, is that God does love us. He loves everyone! The men that I visit at the Queen of Peace in Washington are dying of AIDS. Does God love them? Yes! God loves everyone and He loves always. “Do you mean that when I have problems God is really loving me?,” one of the men asked. I told him, “You’ve got your vocabulary wrong. In the dictionary of the Holy Trinity the word `problem’ does not occur. What we call problems are acts of God’s loving experience.” I know how hard it can be to believe that God loves us when we experience pain or have been rejected by someone who is near and dear to us.

Margaret Mary was chosen by God to provide the Church and through the Church all mankind with a deep and clear understanding of God’s love for us and the love we should have for Him. In spite of the trial and tribulation, including the reputation in her community for being out of her mind, she never wavered in her loving trust in God.

Love is mainly proved by suffering. No wonder Margaret Mary could ask in one of her letters, “What can keep us from loving God and becoming saints, since we have a body that can suffer and a heart that can love?” Margaret Mary became the catalyst whose mission was to restore to the Catholic Church what some had lost and to strengthen what was so weakened – the mystery of human freedom in responding to the merciful love of God.

*God created the human race out of love. He did not need to create anything or anyone. Moreover, He elevated the human race to a supernatural destiny, nothing less than the vision of the Holy Trinity for all eternity. All of this not because He had to, but only because He loves. *God became man out of love for the sinful human race. He became a mortal man to die to prove how much He loves us. He assumed a human will that He might freely suffer. Do all humans suffer? Yes. Do all humans suffer willingly? No. The essence of love is to suffer willingly for the one you claim to love. God became man to suffer with a human will. *Christ, the Son of God who became the Son of Man, suffered and died not just for the predestined elect, but for all mankind. *God gives everyone enough grace to be saved. Is everyone saved? No. God wants all men to be saved yet gave us a free will with which we can choose either to love Him or love ourselves even to the contempt of God. *We have a free will by which we can really choose to love God. When we want what God wants then we are loving Him. Love unites two wills: the will of God, by which He offers us His grace; and our will, by which we correspond with the graces we receive. *We have a free will that can go beyond the call of duty. We can do more than just cooperate with God’s grace to avoid sin. We can also love God more than we have to … more than we must. Read the letters of St. Margaret Mary. After twenty pages you will have to brace yourself. This loving God more than we have to means loving the cross. Christ joyfully chose the cross, and invites us to do the same, out of love for Him. *We believe that Jesus Christ gave us Himself in the Holy Eucharist, by which He remains now on earth, in the fullness of his humanity and with his living human Heart. In every Mass, He freely offers Himself to his heavenly Father, and through the Mass confers the graces He won for us on the cross. In Holy Communion, we receive Him with his Heart into our own hearts, to sustain our selfless love of Him by our enduring love for everyone whom He places into our lives.

Lord Jesus, we believe you are our God who became man so that you might have a human heart, so that you might evoke in our hearts a corresponding love for you. Strengthen our weakness and protect us from ever running away from the cross. Help us to love you here in this valley of tears by faith, so that we can continue loving you in that everlasting embrace for which we were made.