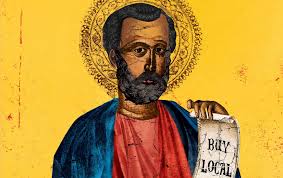 The American bishops’ new pastoral, Catholic Social Teaching and the U.S. Economy, ought to be above all else an expression of Catholic unity for the faithful. Such a pastoral ought to be like the sword Christ brought into the world, cutting through the tangle of “ideologies” designed to capture the mind of the public for some version of secular Realpolitik. The faithful ought to be given a vision of Church teaching and Catholic culture which transcends the secular categoreis of “liberal” and “conservative,” “capitalist” and “socialist,” “left” and “right.” The express intention of the first draft of pastoral on economics is to do just this: “In writing this letter we have accepted the challenge set before us by the Second Vatican Council: `The church has always had the duty of scrutinizing the signs of the times and of interpreting them in the light of the Gospel’ “(#4). This is an admirable goal, but one may reasonably question whether the draft of the pastoral now before us comes close to succeeding. Although the bishops observe that the “significance” of economics “goes beyond purely secular or technical questions to profoundly human, and therefore moral, matters” (ibid.), there is a tendency in this pastoral to become bogged down in precisely the technical matters of statistics and proportions. What is more distressing is the pastoral’s apparent assumption that a Catholic view of economics will be some sort of mediation between competing secular views-between socialism and capitalism, with a bias for the former. Our age does not require, however, yet more tinkering with the current “system,” but a fresh reforging of the Catholic vision of the human community.

It is not our position that the Church should have nothing to say about the economy and related social concerns. The viewpoint, most familiarly associated with Michael Novak, that the Church must keep its nose out of the boardroom as well as the bedroom, is neither Catholic nor conservative, although both terms are sometimes associated with it. It is more the anticlericalism of nineteenth-century liberalism. In fact, a contemporary Catholic will be satisfied with neither “liberalism” nor “conservatism” as the terms are used in our day, insofar as the one gravitates toward socialism, the other toward laissez-faire capitalism, both of which are idolatrous ideologies which give ultimate power to secular economic or political structures. A faithful Catholic will heed the warning of Pope Pius XI, “No one can be at the same time a sincere Catholic and a true Socialist”; and he will equally oppose capitalism-not as a method of corporate investment, but as another secular ideology of getting and spending. No Catholic can deny that the bishops have not merely the right but the duty to address themselves to the moral implications of economic institutions and practices. Moreover, the first part of the draft of the pastoral, “Biblical and Theological Foundations,” is for the most part unexceptional and often inspiring.

The second part, however, “Policy Applications,” often seems to recommend practical action inconsistent with principles set forth in Part I; and its reproach to capitalist excesses often is couched in terms borrowed uncritically from socialism. Worst of all, many of solutions proposed by the pastoral would serve only for the further aggrandizement of the welfare state, the bureaucratic leviathan responsible for so much of the injustice and misery the bishops rightly decry. Very often they furnish ammunition for their critics. For example in dropping a condemnatory phrase about the “growing militarization of the U.S. and global economies,” they leave themselves open to the charge of ignoring the facts: in 1960 the Department of Defense consumed roughly 50% of the budget; in 1970 this figure was down to 39 %; now we are dealing with a figure in the vicinity of 27 % of the total budget. Outlays for social entitlements have risen correspondingly. Hence it is improbable that our continuing problems of poverty can be simply attributed to a failure to apply sufficient funds.

Similarly, it is difficult to see how employment can be regarded as a “right” in the same way that life and liberty are rights. The bishops call current rates of unemployment “morally unacceptable” (#163), but they concede “that an unemployment rate in the range of 3 percent or 4 percent is a reasonable definition of full employment in the United States today” (#179). Now obviously if any rate of unemployment at all is licit-especially if the licit rate is subject to change-then having a job cannot be considered a right in the sense that one has a right not to be murdered. This is an important distinciton in evaluating, for example, the stands of political candidates: men of good will can differ over what and how much to do about unemployment, not about abortion.

Then there is the matter of private accumulations of wealth. The pastoral states categorically that “the distribution of income and wealth in the United States is so inequitable that it violates this minimum standard of distributive justice” (#202). Now there is certainly at the present time a dangerous attenuation of the middle class, resulting from a complex progressive tax system which favors those who work little, if at all, and those with fortunes sufficient to be worth sheltering. But this does not seem to be what the Bishops have in mind, and they also ignore the crucial role of private accumulations of wealth in our society. Without the charitable disposition of large fortunes by private individuals we would lack many important private institutions: colleges and universities, hospitals, galleries, and, yes, churches. Most important, private wealth provides a counterweight to the overwhelming power of government and other massive institutions and makes possible the application of the principle of subsidiarity to which the bishops themselves profess allegiance (#127). Perhaps it is worth noting that large fortunes seem to have done the most evil in our time when they have become quasi-public trusts: consider the role of the Rockefeller and Ford Foundations in funding Third-World genocide by means of contraception, sterilization, and abortion foisted off on poor nations.

Perhaps the pastoral is most disappointing when it takes up the relation of women to the economy. In considering the problem of unemployment, for example, the bishops might fruitfully reflect on the enormous influx of women into the workforce during the past twenty years. It is inconceivable that such a rapid proliferation of new workers would not increase unemployment as women either displace men or join the ranks of the unemployed themselves. Feminist rhetoric notwithstanding, most women seek jobs out of economic necessity, not for personal fulfillment. By any rational standard, the vast majority of jobs-those held by men as well as by womenare less personally rewarding and socially important than rearing one’s own children. In addition, the children thus handed over to daycare centers will in most instances be in worse hands than if their mothers were at home to care for them. Hence it seems odd that the pastoral, instead of condemning our economy for forcing most married women to work, or at least fostering the illusion of the necessity, demands states and federal subsidies for daycare. Women with special intelligence, talents, or education are naturally and rightfully going to exercise them, and they should be free to do so without fear of discrimination; but in a healthy economy, in a society with proper priorities, most women with children would probably prefer to stay home and tend them.

The pastoral evinces a puzzling blindness when it takes up the theme of the “feminization of poverty.” “Between 1960 and 1980,” the bishops note, “the number of U.S. families headed by women rose 80 percent,” and “families with female heads now have a rate of poverty six times that of two-parent families” (#198). Surely a more modest blessing of wisdom and learning than what our bishops wield, with their impressive sources of information, would have sufficed to tell us that a family will have increased difficulty making ends meet in the absence of the husband and father! And surely bishops can find for this growing problem a more appropriate response than increased daycare and higher wages for women. Surely the root of this “feminization of poverty” is the catastrophic increase in “the number of U.S. families headed by women,” which in turn results from the ease, social as well as legal, with which men may now abandon their wives and children. If the bishops are truly serious about judging economic issues in the light of moral and spiritual principles, then why do they here utter no prophetic witness against a secular state which allows “no-fault” divorce and a social climate which encourages the breaking of solemn promises as a means of attaining personal fulfillment. (Of course it is difficult to be prophetic about the mote in your neighbor’s eye with a beam in your own: the bishop’s may experience some discomfort in denouncing divorce in view of the recent record of their own marriage tribunals. As I heard a young priest remark, aptly if inadvertently, in a sermon a few years ago, “Divorce is now recognized as a norm in the Catholic Church.”)

The first draft of the pastoral on the economy has already been widely attacked in conservative circles as lacking in economic sophistication, as too liberal or too radical. If anything it is overly concerned with the technical details of economics (exactly what percentage of unemployment will be called “full employment”?) and insufficiently radical. The bishops are certainly right in finding fault with the economic practices, indeed with the economic obsessions, of the United States. The Catholic vision of the human community is a standing reproach to all modem ideologies which regard economic processes as autonomous, as independent of, prior to, or ultimately constitutive of the common good. The feverish consumerism of contemporary Western society with its mindless production of junk, its empty affluence, and its salacious advertising merits the severest kind of rebuke. Let us hope that the next draft of the pastoral will be genuinely radical in the Catholic social tradition represented by Chesterton, Belloc, Christopher Dawson, and most recently E. F. Schumacher.