By Maura A. Daly 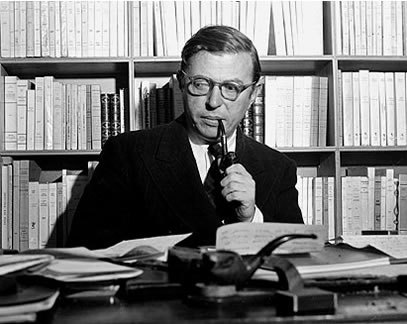 Jean-Paul Sartre seems to have attempted at times to go beyond mere existentialism in an effort to achieve a sort of eternal salvation through the literary creation of a life which transcends physical reality. Put differently, Sartre saw a redeeming power in human words–a solace, a transcendence, and a remedy to ordinary existence in literature, especially fiction. Insofar as he adhered to this view, he divinized words, replacing the Word. Sartre’s problem, of course, has intriguing echoes in an age of mass media which thrives more on propaganda than on information. In any case, Maura A. Daly focuses precisely on Sartre’s divinization of human words in the article which follows, and shows that even for Sartre the experiment does not work.

Nowhere in twentieth-century literature is the dichotomy between secularism and Christianity more apparent than in the writings of Jean-Paul Sartre. Paradoxically, however, the secular beliefs expressed in many of Sartre’s works pattern themselves almost exclusively on the Christian mode. Perhaps this tendency is best exemplified in Sartre’s literary autobiography, Les Mots (Words) which was published in 1964.

This article addresses the role of the word in Sartre’s work as a wouldbe absolute and as a pretender to the status of Logos. In Les Mots, language, by virtue of its Christian association with the Word, is elevated to an absolute in itself. Although he presumably divorces language as an absolute from any religious beliefs, he nevertheless ascribes to it powers of redemption and of immortality. It is by writing that he attempts to redeem himself from the meaninglessness of existence and to assure himself of cultural immortality-the only eternity which Sartre admits. This article is primari1y concerned with the reason that this belief becomes increasingly untenable and why Sartre himself, at the end of his career is compelled to make such an admission. The pathos of the situation, however, arises from the fact that although Sartre eventually admits the relativity of language, his own work continues to belie his admission.

In Sartre’s autobiography, Les Mots, words, language, and literature are all accorded the status of an absolute. For Sartre, the relationship between reality and fiction is inverted. He maintains that it is by the act of writing that the individual is liberated from the burden of existence and materiality, and redeems himself and his neighbor.

From the beginning of Les Mots, Sartre uses an exclusively religious vocabulary to discuss books and literature. Explaining his early sentiments regarding books, he writes: “I didn’t even know how to read yet and already I revered them, these upright stones.”1 Later, commenting on the joy he felt when his mother read fairytales to him, he observes, “I was at Mass: I was taking part in the eternal return of names and events.”2 Finally, after he learned to read, Sartre proclaims, “I had found my religion: nothing seemed more important than a book. In the library, I saw a temple.”3 From his earliest years then, Sartre compared literature with religion. Fairytales, like the Roman Catholic liturgy, were a rite with words and an order that were immutable. Through these words and this order, Sartre was able to transcend the everyday world and be transported into another realm. Describing his flight into literature, he explains, “Our visitors left, I was alone, I escaped from this banal cemetery [reality], I was going to rejoin life, the headiness of books.”4

Because of the transcendance that the realm of books offers, and the immanence of language that it implies, Sartre transforms Fiction into Reality and Reality into Fiction. In his autobiography, he admits: “At the zoo, the monkeys were less monkeys, in the Luxembourg Garden, men were less men. Platonist by nature,. ..I found more reality in the idea than in the thing.”5

In Sartre’s world where the idea and the written word are the object, physicality and nature are despised. Paradoxically, because of Sartre’s inverted values, in order “to exist” he is obliged to write. The author explains: “I was born from writing: before it, there was only an interplay of mirrors: from the time I read my first novel, I knew that a child had entered the palace of mirrors. Writing, I existed, I escaped from the adults; but I only existed to write and if I said: me, that meant I who write.”6 In this revelation one sees the literary analogue of Descartes’ famous justification for being, except that here, it is an inverted justification, aiming at a fictious being and eschewing real existence.

Writing and words become for Sartre not only the mode by which he evades the real world and begins to exist in the fictions one, but also a means by which he seeks to save himself and his neighbor. “Save himself from what?” is the immediate question that springs to mind. Sartre makes several statements which constitute an answer to this question: “In our deepest thoughts our plans and fears are inescapably linked: in the crazy undertaking of writing in order to be pardoned for existing, I can easily see that the idea had some reality despite the boasting and the lies: the proof is that I am still writing fifty years later. “7 There is, however, more to Sartre’s writing than the desire to be “pardoned,” because Sartre equates pardon with immortality and consequently, desires a reprieve from oblivion. Elaborating on this longing, Sartre observes, “sacrality took root in Literature and the man of letters appeared, a fake copy of the Christian that I couldn’t be: his only concern was salvation.”8 Toward the end of his autobiography he explains his solution for salvation: “Terrestial immortality offered itself as a substitute for eternal life.”9

Here, however, a problem arises because although Sartre claims to disbelieve the possibility of eternal life, he invests terrestial immortality with all of the attributes usually associated with its religious analogue. What he is really attempting is a reversal of the theological explanation of Christ’s incarnation in the Last Gospel according to Saint John: “the Word was made flesh.” Sartre wants to reverse this mystery and to adapt it to his own purposes. In his scheme for attaining terrestrial immortality, it is by the gift of his own life or flesh that the word will come into existence-the flesh will be made word. Obviously, such a transformation reeks of Gnosticism, and Sartre explains alternately throughout his autobiography that he has no soul,10 that he is nothing but an unerasable transparency,11 that physical presence is always excessive,12 and finally, that it is only with great difficulty that he tolerates having a body.13 Commenting on his design for literary immortality, he writes: “I would be able to cast my babblings, my conscience, in letters of bronze, to replace the noises of my life by indelible inscriptions, my flesh by a style, the soft spirals of time by eternity, to appear to the Holy Spirit as a given of language.”14

Obviously, this project is unfeasible, and eventually Sartre himself was obliged to admit its unfeasibility: “having discovered the world through language, for a long time, I mistook language for the world. “15 Even though he says at the end of his autobiography that he has been cured of his folly for at least ten years, and he admits that culture doesn’t save anyone or anything, his concluding sentence is an ardent endorsement of humanism. If one is familiar with Sartre’s work, it is impossible to take this endorsement seriously, because he had ripped this “ism” to shreds almost thirty years earlier in his personification of Autodidact, one of the two main characters of his first novel, La Nausde (Nausea). There, humanism is seen as the refuge of the most philosophically and politically naive. Moreover, Autodidact, who espouses this philosophy, is the accumulator of vast amounts of knowledge which he is unable to synthesize, and lofty sentiments which he cannot himself feel.

Sartre’s testimonial for humanism rings falsely in our ears, and his career illustrates the fact that under one guise or another he continued to believe in the transcendant aspect of the word, language, and literature. In fact, in his last major work, The Family Idiot: Gustave Flaubert, Sartre imitates the hero of one of his own creations, Nausea. In Nausea, Antoine Roquentin is writing about an eighteenth-century French nobleman, the Marquis de Rollebon. Roquentin writes about Rollebon so that he can be freed from the weight of existence which is the source of the nausea described by the title. Roquentin, hoping to gain literary immortality, voluntarily “dies” so that Rollebon may live. One day, however, Roquentin realizes that he will never know the truth about himself, about Rollebon, or about anything else. After months of tolerating the crushing weight of existential angst, Roquentin, while listening to a favorite record and thinking about the immortality of the singer and the composer, decides once again to seek his salvation in writing, but this time, in fiction. Roquentin’s interior monologue is as follows

Couldn’t I try… Of course, it wouldn’t be a question of a musical score. ..but couldn’t I try in another field? …It would have to be a book: I don’t know how to do anything else. But not a history book. That talks about what has existed-a being who exists can never justify the existence of another existing being. My error was to want to resuscitate M. de Rollebon. Another type of book. I don’t really know what kind-but, people would have to imagine, behind the printed words something which would not exist, which would be above existence.16

Sartre, in The Family Idiot, is doing the very thing for which he ridiculed his hero Roquentin in Nausea. Sartre attempts to discover the “real” Flaubert and devotes more than a thousand pages to this impossible task. The reader cannot help believing that Sartre, like Roquentin, his mouthpiece, is trying in his last major work to create an existence which is beyond existence, and which transcends existence. This impression becomes even more firmly entrenched when one realizes that The Family Idiot is about Flaubert the man, Flaubert the author, and Flaubert transmogrified and immortalized in his works. Seen from this point of view, Sartre’s last tomes become an explicit defense of the literary anima-the writer, the written, and the writing all of which are cast into a mise en abime. The Family Idiot is also a multiple offense in which Sartre seeks to ground language as an absolutefirst, through its volume; second, because of its solipsistic meditation on itself; and finally, by virtue of its ability to discuss itself and thus to attain the status of meta-language. Interestingly enough, by imitating one of his own characters, Sartre too is engulfed in the mise en abime in which life is only an imitation of art.

Sartre’s last work, like his first novel, Nausea, and his autobiography, Les Mots, shows that language is unable to attain the status of an absolute, that the literary word in definitively unincarnational, and that literature cannot confer any kind of salvation or immortality. Although Sartre repeatedly attempts to cast words, language, and literature in the role of Logos, he undoubtedly was partially aware of the futility of his efforts. In fact, despite his many disclaimers, it is not impossible to make a case for his secretly cherishing a hope for the existence of the real Word. In the middle of his reflections on atheism in Les Mots, he slides in this observation: “sometimes I wonder if I am not playing at loser takes all and that I am deliberately stomping on my hopes of former times so that everything will be returned to me a hundred fold.” I think that Sartre secretly hoped that this was so, and that therefore, his reward from the Word would be in direct proportion to his own words.

1Jean-Paul Sartre, Les Mots (Paris: Gallimard, 1964), p. 37. The translation of the quotations from Les Mots are all by the author of the article and are taken from the Gallimard edition.